Navaratri – the nine nights of the Goddess 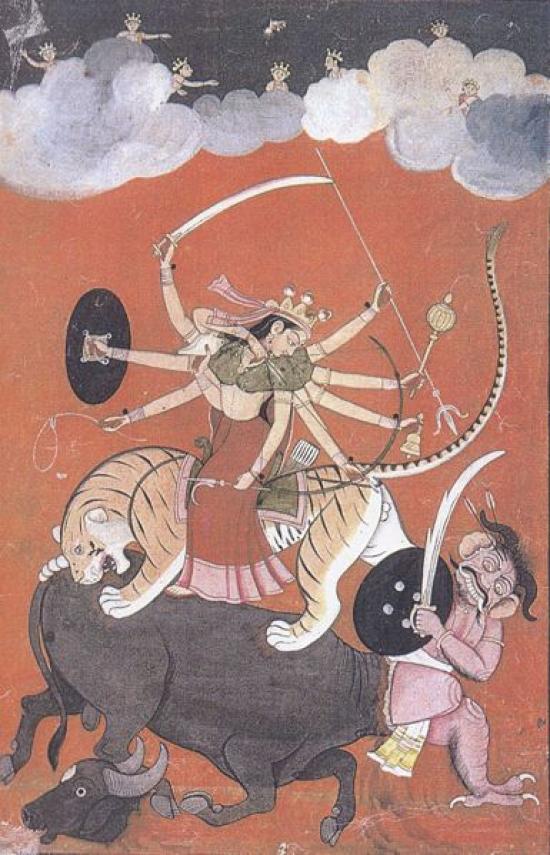 This weekend starts the Navaratri celebration (literally “nine nights”). During these days, and their nights, it is celebrated Goddess Durgaás victory over the demon Mahisa, the victory of light over darkness; Durga´s power to transform our lives dissolving everything it is not useful anymore. Each of those nine days is dedicated to honor one of the forms in which Durga appears, each of the forms in which the femenine power manifests itself.
Mahisa was a terrible demon that was threatening with destroying all the worlds. It is considered in Hindu Mythology that there is a balance of power between Devas (literally light or luminous) and Asura (the demons). The Devas are the Gods and they represent the bright parts of ourselves, in alignment with the Universal energy: our generosity, our compassion, our will power …. They are the energy in the moments when we act guided from the heart and following the highest motivations. The Asuras are the beings  that have won great power through their yogic practices and they use that power in an egoistic way.  We can easily feel that asuric power in the world today just opening a newspaper and reading a couple of news. Also in our own actions or thoughts when they come from resentment, envy, greediness,… In the Tantric vision of Mithology we are all the characters in every story and that ideal search for balance between Devas and Asuras is nothing else that the search for balance between the different parts of ourselves.  It is yoga. 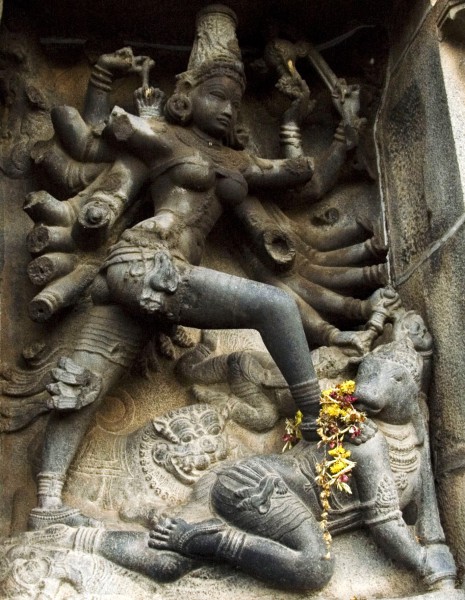 But lets go to the story…  a brief version of the story. Mahisa had received a boon from Brahma because of his intense ascetic practices by which no man or God could ever kill him. He totally forgot  about the power of the femenine… Big mistake !! With all the power acquired through those practices, he dedicated himself to terrorize and conquer all the worlds, even the Deva´s.  Given the terrible threat from Mahisa, the three main Gods, Brahmma, Vishnu and Shiva get together to find a solution. They gather their powerful energies as a  blinding ray of light and, from that flaming light, Goddess Durga is born. All the Gods offer to her their most powerful weapons as a gift: (that is the reason why Durga has so many arms… from eight to thousand!!). The Goddes, fierce and stunningly beautiful at the same time, shows up in the gardens of Mahisa´s palace. After some exchange of impressions, the battle with Mahisa starts. Mahisa usually takes the shape of a buffalo or a bull, resembling the insistent and stubborn ways in which our misalingments and our unconscious tendencies show up in our lives. He is also known for shape-shifting. (Does this sound familiar, how all those tendencies that seem dissolved, part of the past, show up in a new way? ) Durga has all her arms in her multiple arms. During the battle, as Mahisa takes different shapes, she uses the right weapon to confront him . Because Durga is interested in the change that takes place from inside. In teaching us which are our resources to face the different life situations as the challenges shape-shift.  This is a happy ending story. Durga aniquilates the Demon Mahisa, after an ardous battle, cutting his head with her sword that represents the light of knowledge that defeats darkness. All the  Gods rush towards her and fall to her feer, honoring as  Maha Devi (lthe Great Goddess).  ¨Devi, you ended our torment … You are our Mother, our protectress… Please, listen to us and protect us always when we are in danger”  This is Navaratri´s prayer. And this is the active power of the femenine, represented by Durga, that carries us through deep transformations, that guides us in the moments in life when the challenges seem unsurmountable. Durga is the part of our being that does not get intimidated in front of injustice, that is not afraid to tell the truth or to let go of anything harmful or that it does not help us, no matter the amount of attachment we feel.  Durga infuses with the warrior energy as she gives the unconditional love and protection of a mother. In these days of  Navaratri that starts on october 5th, ask her for help. Invoke her presence with her mantra OM DUM DURGA JAY NAMAH, contemplate which are your asuras in this moment of your life and offer them to her.  Allow yourself to feel how here strength and resources are your own.