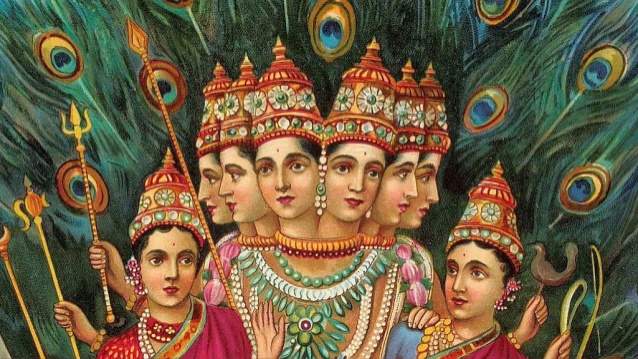 We are in the month of Aries that represents the archetype of the warrior and the warrioress. It is the fiery energy able to initiate, to move through inertia, to fight for justice.  The initiator of transformation. Although we are about to transit into Taurus, I want to share a story, that always inspired me. It is all about warriors, peacocks and transmutation. And as I see the crazy news today, where battles are fought in the name of misguided power and control, I deeply feel the need for us, as yogis, to become ever more committed to our practices and to be brave to fight both the outer battles, in the form of our fierce commitment to our values, and our inner battles. The battles for deep healing, the battles for a life of love.

Once upon a time, there was a thousand-eyed demon called Tarakasura. Trough his austerities, he obtained a boon so he could only get killed by, no one else than, Shiva´s son. Shiva was very well known for her fierce asceticism. After the tragic death of her beloved Sati, who jumped into her father´s ceremonial fire feeling dishonored by him (by her father), everyone doubted he would ever marry again. Taraka felt powerful and indestructible, freely terrorizing and destroying all the three worlds, even the Heaven of the Gods.

The Gods fervently invoked the Maha Devi (the primordial Shakti, the Great Femenine power) through rituals, prayer, mantra and ceremony, so she would incarnate as a Goddess to gain Shiva´s heart again. She became embodied as Parvati, the daughter of the mountain and, after a very long story, she married Shiva.

All the Gods are happy. Now Shiva can have a son. But the love-making between Shiva and Parvati is so intense, and the seed of their love so hot, that no one can hold it. Not even Parvati. So she gives the seed to her sister Svaha, Agni´s wife (the fire God). But even her, that is hot and fiery, can only hold it for a limited time. So she put it inside the cold waters of Goddess Ganga. After a while, Ganga passed it on to the forest Goddess Aranyani, that plants the seed into the fertile soil. It is so that through all this different places, a symbol of the different yogic paths of transformation, a beautiful six-headed boy is born. Vishnu asked the six Krittika star devis to suckle the newborn baby. He took six separate forms until Parvati came and brought the six babies together again in an embrace.

His name was Kartikeya, also known as Skanda or Murugan. He became the Lord of War, and the best of the warriors, as this was his dharma. He is described in the Skanda Purana as brave and intelligent, a great devotee of Shiva, his father, and with the charisma of a leader that will guide Gods and men into battle to defeat  the demon Taraka. 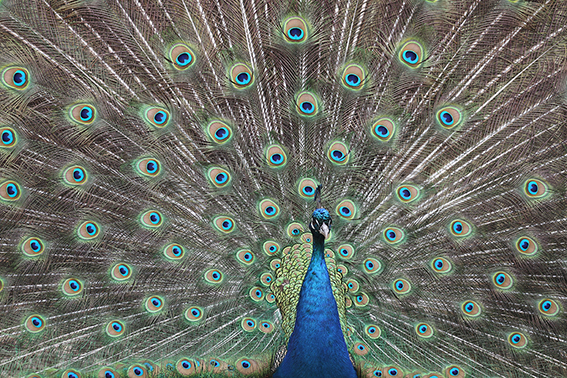 And so it was. When, after a long battle, he killed such a horrible beast he thought, “how could I turn this disaster into beauty?”.  And so he transformed the thousand eyes of the demon into the feathers of the peacock. And the peacock became his vahana or vehicle of Consciousness, as a symbol of transmutation, of what it is possible to do with the ugliest of our experiences.

There is a similar story in Greek Mythology in which the Goddess Hera, Goddess of women and marriage, creates the peacock from Argus, a hundred-eyed gigant.

Since then the tail feathers of the peacock symbolize the “eyes of the star” and the all-seeing knowledge.

Such a beautiful way in which the ancestral wisdom tell us that the yogic power, the one that spring forth from the inner marriage of Shiva and Shakti, of our inner self and our outer actions, is all about transmuting experiences into beauty; about allowing creativity to flow from the battle grounds of the heart; about transforming grieve into hope, anger into acceptance, fear into love, limitations into wisdom. I felt many times inspired by this story. Inspired to create, to paint, to sing,… or to write. And you? In what do you transform your inner demons?

Where are you being called to battle?

How are you a leader in your community? If you are not yet, where do you feel the call of leadership in service to others?

How do you transform the debris of your inner battles in beauty and wisdom?